These Chefs are Transforming their Restaurants into General Stores

About a month ago, Anthony Strong, chef/owner of the two-year-old Prairie in San Francisco, closed his restaurant for four days to finish a renovation that had been going on four months. It was to be a semi-private dining room off the kitchen with its own side door, and a communal redwood table meant for ticketed, family-style dinners. “Today that side room is our online-order fulfillment center,” says Strong, who turned the entire 2,400-square-foot restaurant into a general store after he realized delivery and carry-out weren’t going to be viable options following the shelter-in-place order. “The economics of offering delivery or takeout just didn’t make sense for us,” he says. “But I realized that we do have access to wholesale products at wholesale prices. I figured we could flip this space and sell bulk staple goods for people who want to stock up and not have to wait in line at a grocery store only to find empty shelves. But it’s literally like opening a restaurant all over again.”

Strong set up online interface for the retail store via the Square website they were already using, and worked with his team on putting together pre-made dinner kits inspired by best-selling menu items like his charred cabbage with scallop butter and sour cream and onion burrata. They added shelf-stable goods like dry pasta, sauces, tinned fish, soups, and cured meats; produce from citrus to kale; and necessities like toilet paper, surface disinfectants, and hand soap. Fans of pastry chef Alison Sullivan’s famous pies can also get DIY kits to make them at home (complete with video instruction from Sullivan herself). Only one or two shoppers are allowed inside the store at a time (with access to gloves and a sanitation station at the entrance), but most orders are called in or ordered online and picked up via the side door. “That redwood table blocks us from the guest when they arrive, but we still wear masks and gloves,” says Strong. “If someone doesn’t want to get out of the car, they can lay on their horn and we’ll put their order in their trunk. We’re being really mindful of safety and trying to handle as little as possible.”

Strong is also teaming up with local farms to offer CSA boxes, and is donating pantry boxes to any recently unemployed hospitality workers. “So many of us in the industry have literally never had to stock our pantry, so this gives everybody what they need for home cooking,” he says. Full bottles of liquor and batched cocktails are coming next, and Strong says they’ll keep adding items and listening to what their customers want. “It’s a crazy insane amount of stress to do this, but I will take it over the stress of being at home with a dark restaurant.” 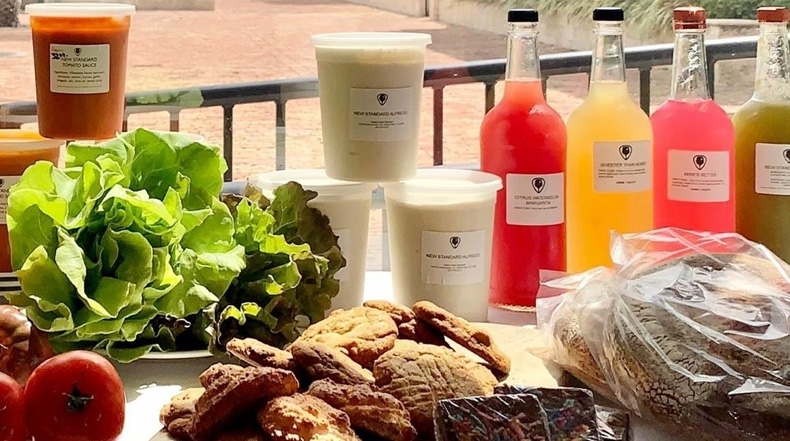 Ryan McLaughlin of Dexter’s New Standard in Winter Park, Fla., has also been listening to his customers since shutting down. “I’ve been through hurricanes, tornados, recessions, but nothing like this. What better time to get creative?” he says. But it was when he started talking to his farmers, who had an abundance of produce and nowhere to deliver it, that he decided to shift to a retail operation with curbside pickup and third-party delivery options. “The farmers have been good to me, and I want to be good to them. We can try to get through this together,” McLaughlin says. Along with heirloom, vine-ripened, and cherry tomatoes, the store also offers mushrooms, and hydroponic lettuces. They are selling housemade pimento cheese, feta mousse spread, pasta sauces, housemade crackers, charcuterie, breads, and pastries including whoopie pies, brownies, cookies, and custom cakes. “Fortunately, our pastry chef used to work for local markets selling bread and baked goods, so she’s been very helpful in this transition,” McLaughlin notes. Rotating family meals on offer include roast chicken, lasagna, pulled pork, Philly cheesesteaks, and other comfort foods, and pre-batched cocktails include sangria. McLaughlin says they’re working on prepped meals to feed a family for a week at a flat rate, and he’s even looking ahead to Easter dinner orders.

“You have to take things one day at a time, but you also have to get ahead of the curve and think about the future as well,” he says. “It’s new and foreign to everyone, and devastating to this industry, but it will pass. As much as it’s about trying to survive, it’s also about trying to help people as much as we can.” ​

In Chicago, Scott Worsham and Sari Zernich Worsham took a nod from the neighborhood bodega when they had to come up with a new concept for their Basque pintxo bar and restaurant, Bar Biscay. “When I lived in New York, the bodega had a little bit of everything and you could find whatever you needed,” says Scott, who used their POS system to set up the virtual shop. “We’re trying to take that approach.”  At Bodega Biscay, guests can order roast chickens, burgers, Sari’s own chicken and dumpling soup, and hanger steaks, along with desserts like their Basque-style cheesecake and chocolate chip cookies. An extensive list of dry goods includes everything from cashews to coffee and vinegar to vanilla beans. There’s a huge list of wine, spirits, and cocktail kits, household goods from pan scrubbers to dish sponges, and dairy, egg, produce, meat, and bread offerings available for curbside pickup or delivery they’re handling in-house. “It’s allowing us to keep our salaried employees on payroll right now,” says Scott, who’s had to lay off his hourly employees at both Bar Biscay and their other restaurant, MFK, but has since raised more than $9K to help them via Go Fund Me employee relief fund. “It’s definitely a new world and we’re trying to navigate and figure it out everyday. We had to a build a brand-new business from scratch in four days, and we were heartened when people started ordering right away.”

Stores like these allow chefs to maintain their connections with customers. “We’re providing food in a different way,” Strong says. “Everybody knows restaurants are such an important part of the fabric of a community. The only time people are going out during the day is to maybe buy canned goods somewhere. They come in to say hi and ask how it’s going. It’s a really weird vortex—not quite a restaurant, not quite a grocery store. I guess we’re just lucky to have our lights on and a few people still punching in.”

Have you considered turning your restaurant into a retail space? Tell us about how it’s going in the comments below.