Nelson German became a chef as a lark. When he was 21, he and three friends made plans to open a nightclub/restaurant, and German, the best cook of the bunch, decided to go to culinary school so he could run the food side of things. The impromptu decision changed everything. “Being Black and Dominican in Washington Heights, I grew up cooking, but it was a hobby,” he recalls. “When I went to school, that’s when it got serious.”

In school, he found a passion for food and a career path that would guide him through stints at several New York City eateries, including the Dominican/Japanese fusion restaurant Hispaniola, the popular seafood destination Joseph’s Citarella, and the Gramercy Park Hotel. His intense curiosity and strong work ethic helped him rise quickly through the ranks, and only six years after graduating from culinary school, German took on his first executive chef position at Absinthe Wine Bar in 2008. But the recession wasn’t kind to restaurants, especially in New York, and in 2010, when his fiancée said she wanted to move back to the Bay Area to be closer to her family, he agreed.

California was an opportunity for German to try something new as he honed his craft. He worked for a few years in San Francisco and took advantage of opportunities to travel and cook in Italy, Spain, and Amsterdam before ultimately settling in Oakland and opening his first restaurant, AlaMar, in 2014.

The menu changes at AlaMar over the years mimic the evolution of German’s cooking style. The original menu showcased his travels and training, focusing on Mediterranean and Asian fare; the only dish from his own culture was his mom’s braised oxtail and plantains. “I wanted to prove that I was the best chef, to cook food from everywhere that I had been,” German explains of his early ambitions. But as he began to learn more about the diversity of the neighborhood and the history of the Black Panthers in Oakland, he realized there was an opportunity to showcase the cuisine of the African diaspora beyond soul food and barbecue, and an audience enthusiastic for that mission. “The Oakland community really supported me and showed me there was a place for my food, our food,” German says. “They helped me get comfortable with my own style.” Today, AlaMar serves mostly Afro-Caribbean cuisine, and the braised oxtail remains on the menu. 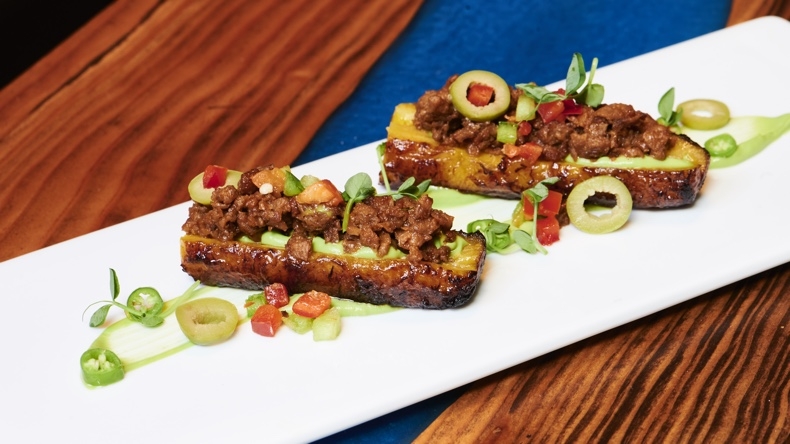 AlaMar’s success gave German and his wife, May, the momentum to open Sobre Mesa, an Afro-Latino cocktail and tapas bar, earlier this year. This time, German knew from the start that this restaurant needed to represent the food of his African and Dominican heritages and celebrate the history of Black and Hispanic communities. Working on the menu, which included soy chorizo-stuffed plantains ($9, recipe) and peri peri chicken wings, was a further awakening for him. “Growing up, my parents denied our Black side,” he says. “It was a very old-fashioned way of thinking. For Sobre Mesa, it was important to show the real me, all sides of my heritage.”

Sobre Mesa’s opening in early March exceeded his expectations; some customers waited three hours to get in. But nine days later, the pandemic forced the Germans to temporarily close the restaurant and lay off their staff. “To realize my dream of opening a second restaurant that was dedicated to my history and my food and then to have to shut it down was devastating,” German laments.

He tweaked the menu at AlaMar to be better suited for takeout, paying special attention to presentation. The Oakland community has continued to embrace them and invest in their success, which has helped the Germans not only survive but thrive; sales at AlaMar are now better than ever.

They have since reopened Sobre Mesa, and hope to maintain takeout, delivery, and indoor dining. “If this had been my first business, it wouldn’t have survived,” German notes. “We’re fortunate to be financially stable and that our landlord was understanding and gave us a break on the rent. So many other restaurants haven’t been so lucky.” Eventually, German plans to open Sobre Mesa for breakfast service, common for bars in many Latin countries.

While German never opened that nightclub and restaurant with his childhood friends—who are an electrical engineer, school principal, and healthcare worker, respectively—he says that if it weren’t for those fanciful daydreams, he likely wouldn’t be where he is today: a successful chef and restaurant owner who is finally able to tell his story, his way.