Chaat is the Snack that Keeps India Humming All Day

In India, it’s always snack time. You might grab a bag of just-fried plantain chips while walking through the market. Or nibble on crunchy, nutty bhel puri snack mix from a paper cone while strolling on the beach after dinner. A shopping trip isn’t complete without sipping a cup of tea and crunching on a few spicy murukku while chatting with the store clerk. Skipping lunch just means you have room for a spicy vada pav slider fried by the road. And a stop for pani puri, the king of all snacks, is the best way to pass an afternoon.

Snacking is a way of life for Indians, whose adoration of chaat, the term used for an array of savory and sweet snacks and street foods, is supreme.

“People in Bombay live on chaat; I grew up on it. After school, on an evening walk, late at night—whenever you have pocket money, you stop for chaat,” says Asad Sheikh, owner of Bombay Street Food in Washington, D.C. “For us, chaat wasn’t an occasion, it was just part of life.”

“Chaat has truly the most incredible combination of temperatures, textures, and flavors that I’ve had in my life,” raves Meherwan Irani, chef/owner of the chaat-driven Chai Pani restaurants in Asheville, N.C., and Decatur, Ga. “Think of samosa chaat. You get warm, soft samosas with a flaky crust mixed with cold yogurt, crispy chickpeas, and sweet and tangy tamarind chutney. I don’t know of any better combination of textures and flavors.”

Chaat can be anything from a quick snack to a meal, eaten on the go or gathered on a table. In a country whose extensive regionality means you’d be hard-pressed to find the same foods from north to south, chaat is a unifying force.

“Chaat is pan-Indian; it transcends religion and regionality,” Irani explains. “You can be Parsi, Hindu, Muslim, Keralite Christian, and at home eat what is traditional for your culture. But on the street in major cities where all those cultures are together, everyone eats the same chaat. The street vendors refined what they do to be the best. Think about it; they’re serving 1.2 billion people. I’ll be at the chaat walla, next to a homeless guy using 10 cents to buy some, and then a limo pulls up as well. It’s universal. Everyone loves chaat.”

Their adoration of chaat inspired Sheikh, Irani, and Nashville’s Maneet Chauhan to open snack-driven restaurants in the U.S. Chaat is an easy, low-risk way for people unfamiliar with Indian food to try a few different dishes, and its crunchy, spicy, sweet, tangy nature makes it irresistible, for the guests who eat it and the chefs who build their restaurants around it.

When Chauhan and her husband and business partner, Vivek Deora, first walked into the space they found for their latest restaurant, the built-in counter in the center sparked their interest.

“We turned to each other and said that could be a chaat bar,” Chauhan recalls. “And that set the idea for the restaurant. We wanted to introduce people to the different chaats. We didn’t know if people would understand it, but I’ve learned that when you are passionate about something, people will respond to it.”

That space became Chaatable, their street food-focused restaurant, at which snacks make the meal. The menu includes many of Chauhan’s favorites, like the samosa chana chaat of chopped samosas and chickpeas, the papdi chaat of flour crisps tossed with chutney and black garbanzos, and vada pav ($9, recipe), a South Indian favorite she discovered while in college.

“Carbs and carbs and carbs is a magic combination,” Chauhan laughs when asked about vada pav. “I love the spicy potato croquette, seasoned with curry leaves, hing (asafetida), turmeric, and mustard seeds. But what I also love about it is that it’s so many layers of flavors and textures. You have soft mashed potato fried in chickpea flour that is spiced. It’s put in a pav—a soft bun—along with three different chutneys: spicy coconut chile chutney, fresh mint chutney, and sweet and tangy tamarind chutney. You get so many flavors and textures in one bite.”

That multitude of flavors and textures is what makes chaat so enticing, and there’s no better example than bhel puri. At Chaatable, guests build their own, marking chits at their table with the ingredients they want in their mix, like puffed rice, crispy chickpea noodles, nuts, strawberries, cucumber, boiled potatoes, pomegranate seeds, and minced onions. The chaat bar at the center—like any in India—doubles as entertainment as cooks toss bhel puri ingredients with chutneys before they are served tableside.

“Chaat is meant to be fun,” she explains. “You pick what you want, and mix all of these ingredients together; it’s part of the experience.”

Bhel puri is one of the snacks that inspired Chauhan to write a chaat cookbook, to be released in October. While researching the book, she became especially enamored of the food sold at different train stations as she traveled across India.

“We’d stop and the local vendors would show us what they had. To me, that was a great insight into the food of that place,” she says. “We were in Delhi and had this chaat with starfruit and sweet potato they sell only in winter. And a dessert called daulat chaat, made with milk foam, sugar, nuts, and spices and saffron. I’ve never had anything like that. I grew up with sattu kachori chaat, which is made with roasted besan (chickpea flour). In the South, you find idli chaat. In Kolkata, you get ghugni chaat, made with black garbanzos and tomatoes. Everybody has their own interpretation; there’s so much to see.”

That versatility is part of what made Irani focus on chaat. When he was trying to come up with an idea behind his first restaurant, he didn’t want to do something generic and call it an Indian restaurant (“that’s meaningless,” he says).

“I’m not qualified to cook Bengali food, Keralite food, Gujarati food,” he says. “Then my wife asked me what I loved eating in India that spoke to me. It was easy—chaat. I’m half Parsi, half Hindu, born in London and raised in India. Chaat for me was perfect, because like my background, it belongs to everybody. There’s no manual for it, no rules. You figure it out based on what you have around you.”

At Irani’s restaurants, local ingredients and Indian techniques meld for a menu that includes his fried kale pakoras, pav bhaji (a vegetable-hash slider popular in Mumbai), and fried strips of okra seasoned with chaat masala, the spice blend that lends a savory, sweet, tangy, and umami element to snacks. Among the most popular is his grilled corn bhel ($9.49, recipe). 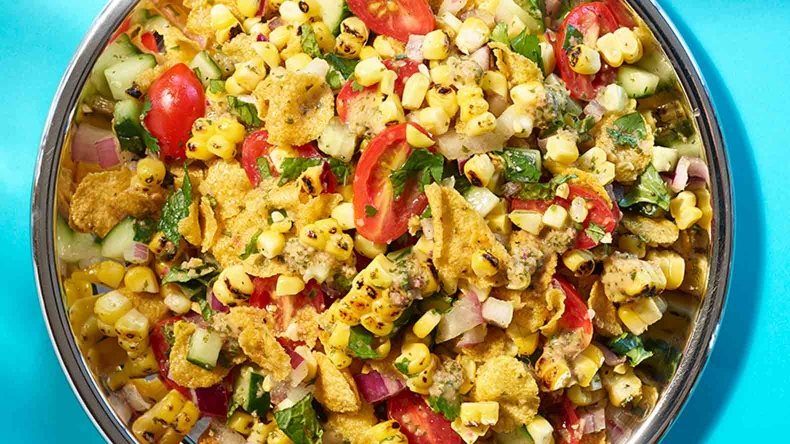 “My favorite Indian street food is bhel puri, hands down,” Irani says. “Bhel is any mixture of semi-dry, crispy, and wet ingredients—as close as India gets to a salad on the street. I was worried it would be too esoteric, and wanted to figure out what would appeal to an American audience. We already served roasted corn with salt and lime, which is a popular Indian street food in fall. We had leftover charred corn, so we shaved it off the cob. I thought corn would work for a bhel; people in the South know a corn salad, and it was approachable. So we came up with a cilantro-cumin-lime vinaigrette and a few other ingredients and it just works. Indian food has always evolved out of necessity. This is just our way of doing it.”

More traditional is his pani puri. The pani puri station is front and center at the Decatur location, where on weekend nights, guests line up for the small hollow puffs to be filled with mashed potatoes and chickpeas. Then, Sridevi Bhonagiri, the cook who runs the station, dunks the pani puri first into tamarind water, then into a water heavily seasoned with spices, chiles, cilantro, and mint. She hands it to the guest, who eats it in one crunchy, sweet, savory, tangy bite. And then, inevitably, goes back for more.

“A few years back, people just wanted butter chicken or chicken tikka masala,” he notes. “But chaat is a good fit for downtown D.C., with so many diplomats and young people here. People like trying something new. Now, we do more chaat and less main dishes.”

Among the most popular snacks at his restaurant is the Bombay palak chaat ($7, recipe), for which spinach is coated in chickpea flour, deep-fried and tossed with yogurt, onions, tomato, tamarind chutney, and cilantro chutney. It’s a personal taste of home for Sheikh. 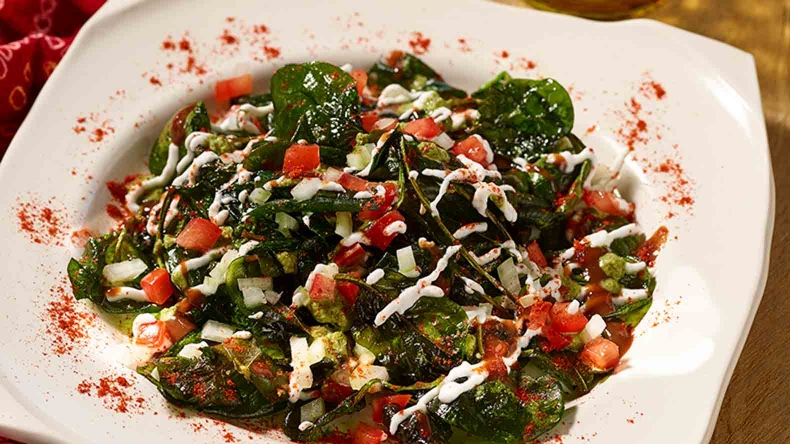 “Growing up, chaat was one of my all-time favorite things to eat, but when I came to America 18 years ago, I didn’t see anything like it,” he says. “I missed that food, and thought I would bring that here. It’s a personal thing; it means a lot to me.”

Chandra Ram is the editor of Plate.