When Bill Jeong and Chung Jeong (no relation) first opened their 1,000-square-foot simple restaurant with concrete floors and beige walls in Seattle’s Lower Queen Anne neighborhood in August 2019, no one could have predicted what was to come. But even during an incredibly turbulent year for restaurants, Paju has quickly become a favorite among a dining audience hungry for something new: risk-taking and refined takes on Korean flavors.

Paju started relatively small, with Bill running service and Chung as chef. Its proximity to the University of Washington was conducive to discovery by college students, as were the budget-friendly price points on the 10-item menu. At first, they came for the crispy chicken wings, glistening with soy garlic or Korean sweet chile sauces. And the squid-inked fried rice with bits of bacon and kimchi strewn throughout, topped with a smoky quail egg. And of course, the okonomiyaki-inspired crispy seafood pancake, zigged with mayo and zagged with tonkatsu sauce before it’s dusted with delicate, curly bonito flakes.

But Paju is also adjacent to Seattle Center, a place tourists know because of the Space Needle but that also attracts local theater and opera buffs for its concentration of cultural venues. After an enthusiastic review in The Seattle Times, the restaurant’s clientele expanded to theater-goers eager to try the boundary-pushing menu. What they discovered was a humble Korean restaurant showcasing a wide range of ingredients and techniques in dishes that are forward-thinking and delightful.

Soon, diners graduated to the rest of the menu. “Our customer dynamic changed to a more mature crowd; they started ordering our endive salad, our yellowtail, our mackerel. Things that aren’t really available at other restaurants,” Bill notes.

Chung previously cooked at the acclaimed Atomix in New York, as well as restaurants in Beijing and Tokyo, while Bill spent time at the now-shuttered Günther Seeger. But the evolution of their refined takes on flavor and service took root at New York City’s Jungsik, the two-Michelin-starred tasting-menu restaurant where they met as cooks. 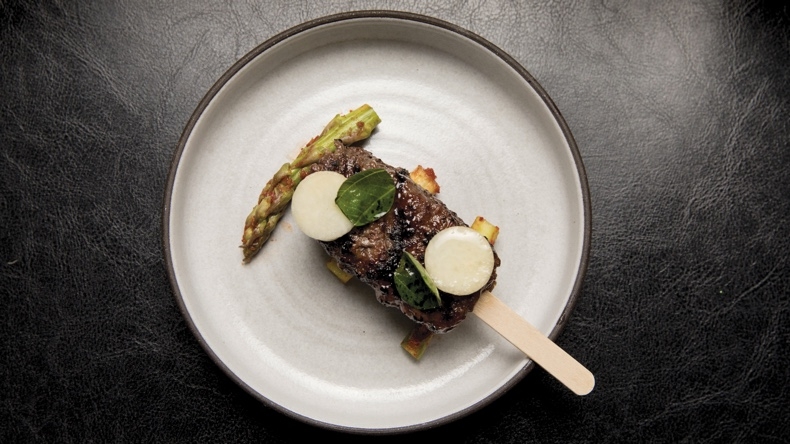 Bill later moved back to Seattle (he had moved there from Korea as a child and his parents are still there). “We had a child, and living in New York City on a single income was not doable, so we moved back,” he explains. He eventually convinced Chung to join him there and open Paju.

With so many years of fine-dining experience between the two of them, it’s notable that a meal at Paju—where no dish is over $20—strikes quite a bargain, offering all of the technique of fine dining and none of the fuss. The endive salad boasts individual curled leaves, each cradling a bit of grape, sunflower seed, and charcoal-smoked vinaigrette, and beautifully arranged in a spiral atop a creamy canvass of burrata. The yellowtail is diced and arranged in a circular formation inside its bowl, dressed with wild, earthy sesame oil, a refreshing cucumber and fennel gazpacho and topped with a spicy-sweet gochujang granita—disparate preparations forming a vibrant dish with the hues of a Washington sunset. And the mackerel is a marvel, braised in a bright ginger mixture before it’s rested atop similarly braised daikon and a bed of savory rice, then garnished with smoked eggplant purée and pickled persimmon. The confluence of these Korean flavors—often gilded with a touch of smoke—is taken to the next level thanks to the textural contrast that Chung employs with each dish.

Their ddeok galbi is no exception. The soy-marinated short ribs on the bone are usually the centerpiece in Korean barbecue, but Paju’s version takes it up a notch by taking the meat off the bone. Chung minces the meat, cutting through the striations to make it more tender. A popsicle stick is a playful replacement of the bone that makes the dish both striking to look at and easy to eat. Meanwhile, he layers more flavors into the dish: a chimichurri made with equal parts cilantro and parsley that provides bright taste and color, an asparagus kimchi that adds both earthy and fermented notes, and a final touch of pickled persimmon, which punctuates the dish with tang and a touch of sweetness ($10, recipe).

Preparations like this make Paju memorable as they show off Bill and Chung’s enlightened sensibility on Korean cooking. It’s an exciting restaurant that has made Seattle as a dining town all the better for it.