May 15 was supposed to be a big day for Eric Adjepong. It was the planned opening day for his first restaurant, a fast-casual food stall in Washington D.C. called On the Double. After operating his own catering and event business and twice competing on Top Chef, opening a restaurant was the ambitious but logical next step for the chef who has centered his career on telling the story of West African diaspora through food. But like everyone else in the restaurant industry, his plans were brought to a standstill by COVID-19. Still, his determination perseveres.

“I’ve never been in a position like this,” Adjepong reflects. “Especially when 2020 was going really well and now it’s just halted. I’m definitely ready to get back to so many things.”

Adjepong is luckier than most of his peers, for the national profile and opportunities that came from his Top Chef appearances and even the timing of the shutdown. He had a contract to take over a space in D.C.’s popular food and shopping hall, Union Market, but his lease had not yet begun and he had no staff on payroll when the pandemic hit the U.S. “I’m not responsible for anything right now,” he admits with relief, with the restlessness of a chef forced to wait this out. “Still, when you’ve had something in mind and you’ve been working on it and anticipating it for a long time…I was antsy and ready to go. But I’m a firm believer of everything happening in its own time.”

If you had asked Adjepong about his plans just a year ago, he would have hinted about opening a brick and mortar restaurant similar to the concept he presented during his second stint on Top Chef. Fans of the show may recall Season 17’s Restaurant Wars episode (filmed about six months ago), where the challenge was to pitch the idea of a restaurant to James Beard award-winning restaurateurs Kevin Boehm and Rob Katz. Adjepong’s vision was reminiscent of fine dining without overwhelming formality. “One thing I love is offering an elevated experience in a place where people feel truly comfortable to eat and feel as themselves,” he says. While the idea wasn’t a win on the show (and Adjepong was eliminated during that episode)­, it was the realities of brick and mortar real estate costs that forced him to set his sights on something simpler to start. Still, he's optimistic.

“The plans are still there, they’ve just shifted priorities,” Adjepong reassures. “Being malleable and being able to adapt is key because, if not, especially as an entrepreneur, you’re setting yourself up for failure.”

Before Top Chef, Adjepong worked with notable chefs who had also competed on the show, like Bryan Voltaggio of Volt in Maryland, who bonded with him over their approach to food and plating. “I’ve always admired [Voltaggio] ever since I was in undergrad to be honest,” Adjepong says. “Just his eye and how he sees food and understands food…that’s something that instantly connected with me.” By the time Adjepong helped Kwame Onwuachi, another Top Chef alum, open the critically-acclaimed Kith/Kin in Washington, D.C., he had already begun to hone his style and work cooking West African cuisine for American audiences. “It was a really cool kind of experience just being able to creatively go crazy and really do whatever we wanted with the food we grew up eating,” Adjepong says of working with Onwuachi, both of whom grew up in the Bronx.

In between restaurants, Adjepong taught recreational cooking classes for adults in New York, Washington D.C., and Baltimore, an experience that was also educational for the chef. “It was a sample size for me,” he says of wanting to see how well those classes would perform. They sold out quicker that Adjepong imagined, much to his delight: “It was really cool for me to see so many people coming in for so many reasons, all still trying to explore West African food.” These experiences, coupled with the fan-favorite success he garnered with his performance on Top Chef, solidified for him his plan to opening a shop like On the Double.

On the Double will be a celebration of Caribbean food influenced by India and West Africa as it reflects Adjepong’s personal food history. Growing up in the Bronx as a first-generation child of immigrants from Ghana, Adjepong remembers the prevalence of roti (thin, soft, and unleavened flatbread most commonly found in the Caribbean and on the Indian subcontinent) and doubles (a popular Caribbean street snack of bara flatbread spiced with cumin and turmeric) available from local restaurants and street carts. “I always thought it would be really cool to have the concept of the African diaspora through the lens of a roti shop,” he says.

The set up for On the Double is similar to that of other fast-casual concepts. Customers will start by choosing between either a bara or a roti for the base of the dish (both are excellent vessels for gravy-rich foods). They will then choose between proteins like chicken yassa, coconut curry shrimp, stewed beef, and curried goat. Each plate will come with Indian staples of chana (chickpeas) and aloo (potatoes) to round out the meal.

“My focus was really on Trinidadian influence,” Adjepong says of his menu. “Obviously there’s a huge, huge inspiration that comes from southeast India in the Caribbean. I wanted to call back to those authentic notes in a way that I can feel comfortable [with] but also really excited to serve.” 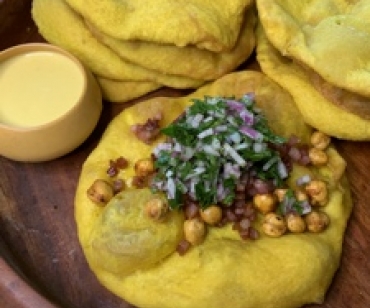 For Adjepong, opening his restaurant is a step towards having a seat at the table to grow the footprint of West African food and culture across the United States. With the menu fully finalized and a team of people ready to start working, he is already exploring the idea of expanding the concept nationwide and has spoken to developers in different cities about scaling up.

“I’m ready to serve. I’m ready to meet people. I’m ready to put this concept out,” he enthuses, tired of the waiting game. He’s staying busy by sharing his knowledge and love for West African food by hosting weekly virtual cooking classes, but hopes to open On the Double by late August. “I want to focus on knocking this out of the park, staying true to my flavors, my focus, and my ethos. That’s really important to me before I move up and branch out.”

Despite the last few weeks of racial tensions in America, Adjepong remains unmoved in his mission. “I’ve seen this episode or an episode like this before last week. This is something that has happened and is reoccurring,” he explains in a weary voice. “I’ve noticed that—at least on my side—knowledge breaks through ignorance and racism. Wanting to know and wanting to explore, especially on the food side, definitely helps with relations. I’m hoping that can happen with On the Double.”

Congratulations. Would be nice to Chef searing gloves as he is plating food.
A photo of Chef plating raw veg with no gloves does not instill confidence.I do not doubt Chef's safety standards but times have changed. Best of luck Chef!! Carry on!!
Subscribe Now