As cities across the country shut down amid the COVID-19 pandemic and once-thriving restaurants from New York to Seattle are shedding staff to adjust to severe revenue shortfalls, Edward Lee says this is only the beginning of a hospitality industry crisis—one he hopes to help alleviate by turning his restaurants into relief kitchens.

Lee's restaurants—three in Louisville, Ky., and one in Washington, D.C.—were open and busy earlier this month. But after watching the dominos fall in cities elsewhere as residents were ordered to stay at home, he knew it was inevitable that March 15, a Sunday, would be the last service for a while.

"I started to think that I was going to have to lay off 200 people overnight," Lee says. "We started to scramble to see what we could do."

The next day, the same day that the governor of Kentucky ordered all restaurants to close for dine-in service to limit the spread of the virus, he turned 610 Magnolia into a relief kitchen and pantry, serving meals and offering dry goods and staples such as diapers and formula for unemployed restaurant workers in Louisville.

"That first day, we had an overwhelming response," Lee says. "We had families feeding their kids. There were grown men crying. Everyone realized that this is real. The actual time until you get your unemployment check in the mail could be six days, it could be three weeks. In the meantime, people are simply running out of money. Some have families, disabled children, and these people are quickly turning desperate.”

The bourbon company Maker's Mark had offered to offset some of the costs involved with setting up the kitchen, but after that first day, Lee and Lindsey Ofcacek, managing director and co-founder of the Louisville-based LEE Initiative supporting restaurant workers, said they needed more extensive financial support. The company agreed to provide enough funds to keep the kitchen operating for two weeks.

Within a week, the Restaurant Workers Relief Program built so much momentum that it went national.

As of March 23, LEE Initiatives kitchens have opened in 11 cities, in partnership with chefs including Linton Hopkins, Jose Salazar, Edouardo Jordan and Linton Hopkins (see the full list below). Maker’s Mark will underwrite the first two weeks in each city, and then local donations will have to cover operations.

"It's costing us $2,000 a day," Lee says. "We were able to keep some of my staff employed to run the relief kitchen. Now it's let’s see where this takes us."

The idea is that after two weeks, local donations will help keep the kitchens running until unemployment checks and other forms of government aid reach workers. So far, the wider Louisville community is heeding the call to chip in. On the day Lee announced the workers relief program, he received $15,000 in local donations; many contributions were less than $10.

Still, he says it doesn’t go far enough. "The 400 meals we serve is a dent," he says. "We are turning away people every night. In a small town like Louisville, we can't do it in one kitchen." 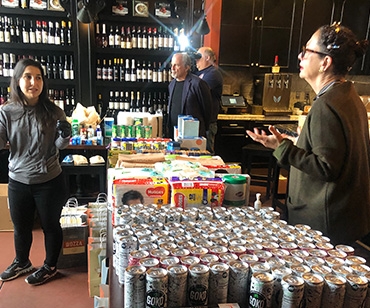 Every night, the kitchen at 610 Magnolia runs out of food, diapers, formula, and dried goods. "The hardest problem to solve is that we turned our restaurant into a grocery store and we cannot find supplies," Lee explains. "A week ago, we didn't think we were going to have a quarantine and be out of work. I don't think anyone understood the scope of how many people restaurants employ, how many people around the country.

"It's not about trendy fancy food," he continues. "It's not that. It's bartenders at the local dive bar that are coming to us. It's your family restaurants down the block. Your pizza parlor. It's tough. There are so many more people that we thought. People are dropping off two or three diapers, a box of wipes, and we give them out to the people who need them. Basically, I am in tears every day and we soldier on. It's been tough but also really inspiring.”

For more information on relief efforts and how to donate, visit  www.leeinitiative.org and follow The LEE Initiative on Instagram. Here are the relief kitchens set up so far; we’ll update this list as needed.

Kate Leahy is a food writer and author based in San Francisco.

Chef Greg Braxtrom at Olmsted and Nate Adler at Gertie

We’re working to Set up a Northern Cook & Lake County, IL branch. Any vendors or suppliers who want to help, please contact me.
Subscribe Now